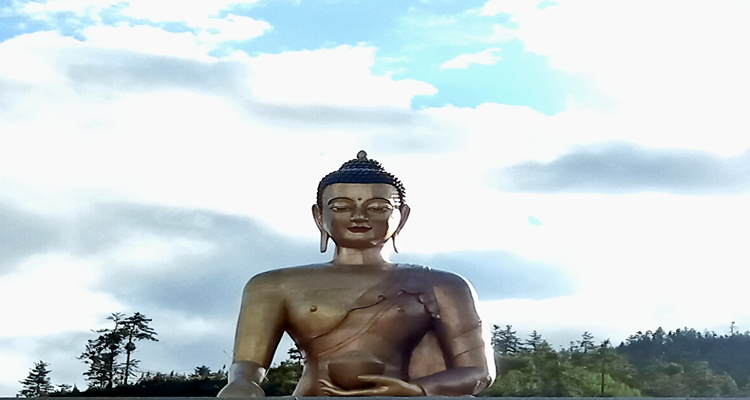 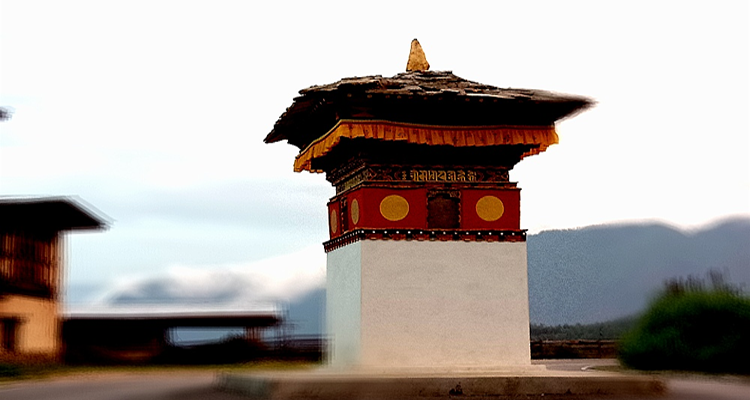 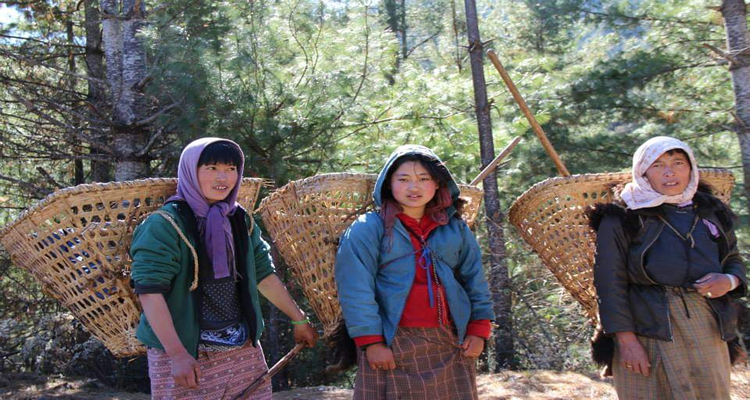 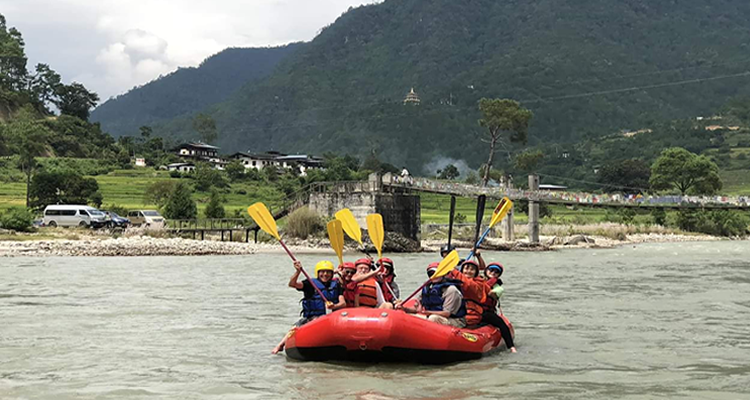 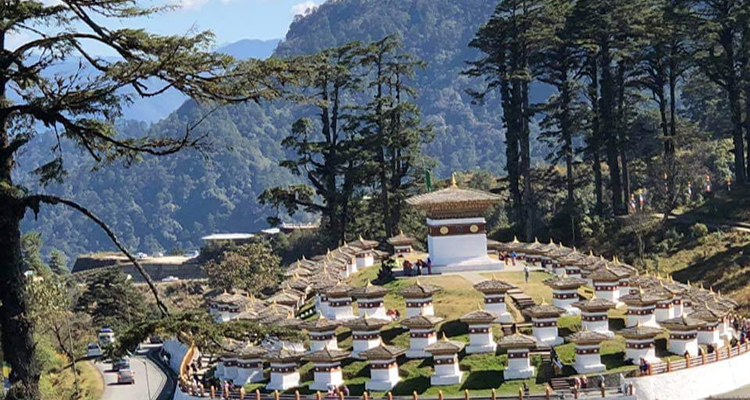 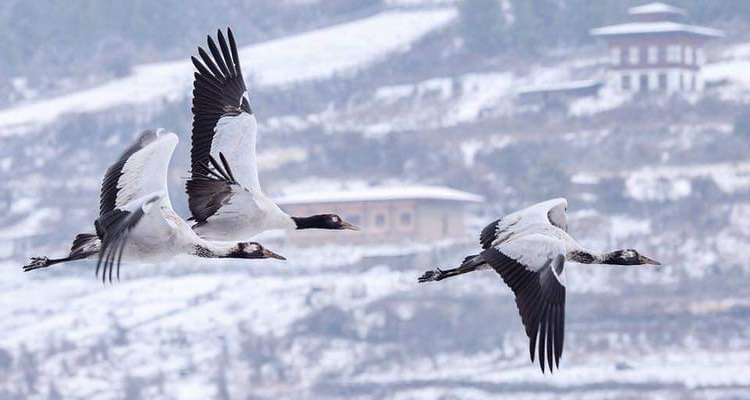 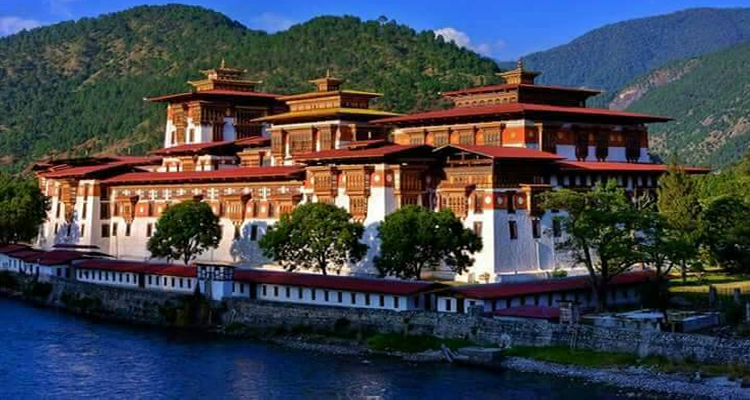 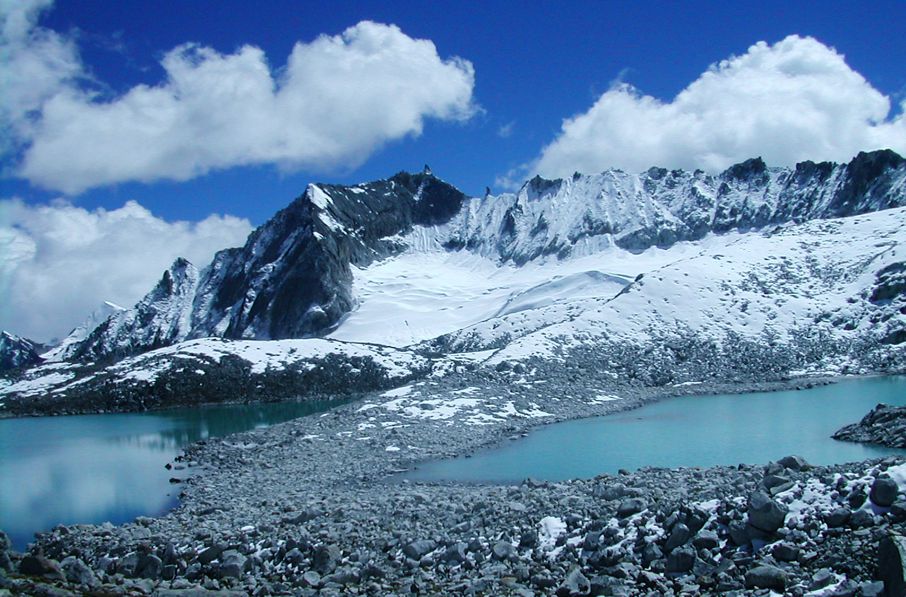 This six day trek takes you into an area adorned with a multitude of pristine, crystal clear lakes. As you walk amidst the shimmering lakes you’ll be treated to stunning views of the entire Himalayan mountain range and some of the world’s highest peaks including Mt. Everest, Jomolhari, Masang Gang, Jichu Drake, Gangche Ta and many more.

During the trek an entire day will be dedicated to visiting some of the more picturesque lakes, fishing and resting. The trail also takes you through several Bhutanese villages so you can get a good idea of traditional Bhutanese village life as you make your way back from the lakes.

While this is a somewhat strenuous trek, it is well worth the effort because of the tranquility and beauty of natural landscape that you will enjoy during the journey. The best time to embark on this trek is between April-June or September –October. 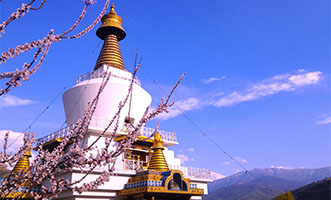 Built in 1974 to honor the third Druk Gyalpo, His Majesty the 3rd King of Bhutan Jigme Dorji Wangchuck (1928–1972), it is one of the most prominent landmark of Thimphu. People from everywhere come here to do the Chorten Kora (going round the chorten). It looks magnificent a great place to visit and pray 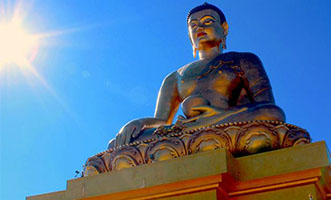 Buddha Point is a gigantic Shakyamuni Buddha statue completed construction on September 25th 2015 celebrating 60th birth anniversary of fourth king His Majesty Jigme Singye Wangchuck. It houses 100,000 8-inch-tall and 25,000 12-inch-tall gilded Buddhas respectively, each of which, like the Buddha Dordenma itself, will be made of bronze and gilded in gold. it will be one of the largest Buddha rupas (Form of the Awakened One) in the world, at a height of 169 feet (51.5 meters). Big ground in front makes it a nice place to stroll around and enjoy the scenic beauty of Thimphu 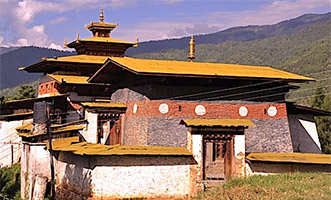 Lam Phajo Drugom Zhipo built it in 12th century, one of the oldest lhakhangs in the country. Lam Phajo Drugom Zhipo chose the site and the monastery houses Chenrizig (Avolokitesawara), an 11-headed, thousand-armed manifestation as the central statue. New born are brought here for naming them 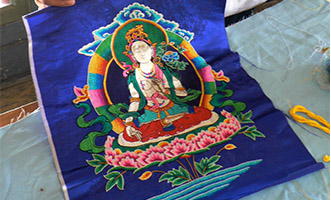 In 1680, Ngawang Namgyal, the Zhabdrung Rinpoche, ordered the establishment of the school for instruction in the thirteen traditional arts. Although the skills existed much earlier, it is believed that the zorig chusum was first formally categorised during the rule of Gyalse Tenzin Rabgye (1680-1694), the 4th Druk Desi (secular ruler). You get to witness artisans & craftsman in action in these 13 different crafts & arts which is rare view in today's machine manufacturing era. It trains the Bhutanese students on all the 13 crafts and is leading the race to preserve the culture of Bhutan 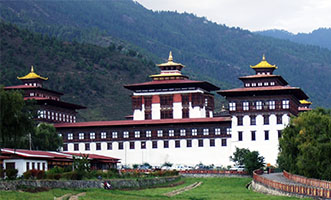 Traditionally been the seat of the Druk Desi (or "Dharma Raja"), the head of Bhutan's civil government, an office which has been combined with the kingship since the creation of the monarchy in 1907, and summer capital of the country. The original Thimphu dzong (the Do-Ngön Dzong, or Blue Stone Dzong) was built in 1216 by Lama Gyalwa Lhanapa (1164-1224). In 1641 Shabdrung Ngawang Namgyal took over that Dzong from the Lhapa Kagyu, reconsecrated, and renamed it Tashichö-dzong. Tashichö Dzong has been the seat of Bhutan's government since 1968. It presently houses the throne room and offices of the king, the cabinet secretariat and the ministries of home affairs and finance. Lowering of the national flag in the evening around 5 pm is an event not to be missed and the lights during the night makes it a visual treat. 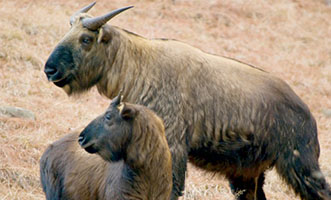 Takin - the national animal of Bhutan is a peculiar animal with head of a goat and body of a cow, is believed to be created by Lama Drukpa Kuenlay - The Divine Madman upon his follower's request to show a miracle. He created it by attaching the skull of a goat and bones of a cow. It is an area of 3.4 hectares (8.4 acres). It is a collaborative effort of the Royal Government of Bhutan and World Wide Fund, WWF (Bhutan), including a traditionally styled entrance gate, a small information center, signage and trash receptacles. 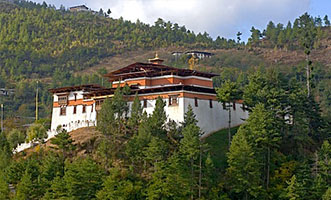 It is the 1st Dzong built by Zhabdrung Ngawang Namgyal in 1629 in Bhutan. Earlier called Sangak Zabdhon Phodrang (Bhutanese language meaning: "Palace of the Profound Meaning of Secret Mantras") is a small dzong in size compared to other dzongs in Bhutan. It is believed that the dzong provided protection against a demon which had disappeared into a rock close to the site and hence taken the name 'Simtoka' meaning "simmo" (demoness) and 'do' meaning "stone". The Buddhist school of Linguistics was established as part of the dzong. 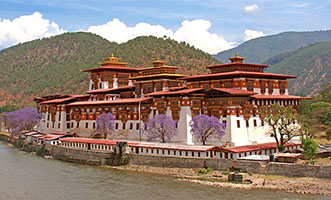 Also known as Pungtang Dechen Photrang Dzong (meaning "the palace of great happiness or bliss"). Built by Ngawang Namgyal, 1st Zhabdrung Rinpoche, in 1637–38 and houses sacred relics of the southern Drukpa Lineage of the Kagyu school of Tibetan Buddhism, including the Rangjung Kasarpani and the sacred remains of Ngawang Namgyal and the tertön Pema Lingpa. It is the winter capital of Bhutan and 2nd largest dzong. It is listed as a tentative site in Bhutan's Tentative List for UNESCO inclusion 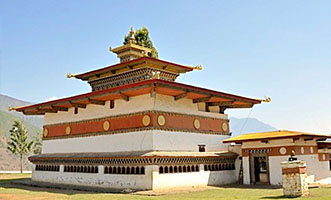 Also know as Chime Lhakhang stands on a round hillock and was built in 1499 by the 14th Drukpa hierarch, Ngawang Choegyel, after the site was blessed by the "Divine Madman" the maverick saint Drukpa Kunley (1455–1529) who built a chorten on the site. Believed to be the Temple of Fertility, pilgrims & women visiting are blessed with wooden phallus (have been intended to drive away the evil eye and malicious gossip) decorated with a silver handle. Lama Drukpa Kuenley is revered for his unorthodox ways of teaching Buddhism by singing, humour and outrageous behaviour, which amounted to being bizarre, shocking and with sexual overtones 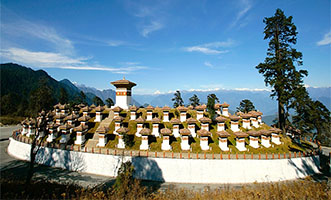 Built on the pass overlooking Thimphu valley on one side and Wangdue/Punakha on the other, it is on the way to Punakha from Thimphu on a hill top where 108 memorial chortens or stupas known as "Druk Wangyal Chortens" have been built by Ashi Dorji Wangmo Wangchuk, the eldest Queen Mother. Apart from the chortens there is a monastery called the Druk Wangyal Lhakhang (temple), built in honour of the fourth Druk Gyalpo, Jigme Singye Wangchuck. 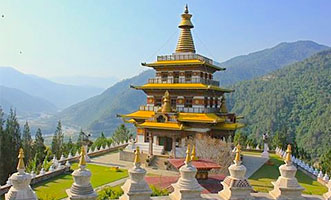 Built by Her Majesty the Queen Mother, Ashi Tshering Yangdon Wangchuck for the well being of the kingdom, it's people and all sentient beings took 9 years to complete this magnificent 4 storied Chorten showcasing the expertise and marvel of Bhutanese architecture, art & paintings. Lovely view of Punakha valley awaits you after a hike on 30 to 60 minutes from the suspension bridge. 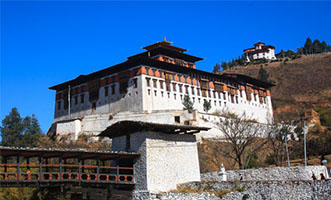 Built in 1644 by Ngawang Namgyal, the Zhabdrung Rinpoche, it stands as a majestic symbol of authority and governance. The administrative and religious seat of Paro Dzongkhag (a state of Bhutan). Located just above Paro Chu (river) making it a picturesque delight. 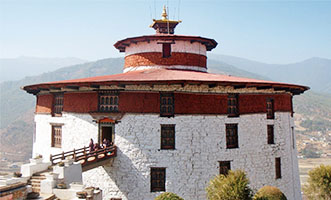 The national museum of Bhutan - Taa Dzong has artifact from around the country and some of the artefacts ranging back to even 4000 B.C E. and to the present day. Here you get to see the ancient Bhutanese culture and it is a must visit if you are interest to know and understand Bhutan better 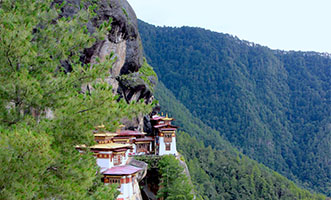 Taktshang or the Tiger's Nest got it's name from the myth that in 8th century Guru Padmasambhava (Guru Rinpoche) flew here on a Tigress Back and meditated to in a cave here t0 subdue the demons and provide relief to the local people of Paro. Built on a cliff that stands 10,000 feet/3,048 meter above sea level overlooking Paro valley. It is a visual treat and a holy place for pilgrimage 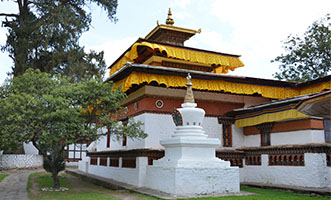 Also known as Kyerchu Temple or Lho Kyerchu) is an important Himalayan Buddhist temple situated in Lamgong Gewog of Paro District in Bhutan. Built in the 7th century by the Tibetan Emperor Songtsän Gampo, the Jowo Temple of Kyichu is one of the oldest temples in Bhutan. It was visited by Guru Rinpoche in the 8th century and believed to have concealed many religious relics and treasures. A holy place for pilgrimage 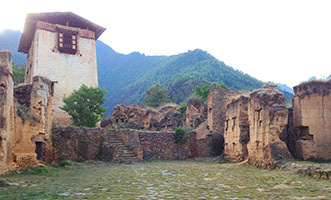 Once a fortress constructed in 1649 by Tenzin Drukdra on the behest of Ngawang Namgyal, Zhabdrung Rinpoche to commemorate the victory over Tibet invasion, it was in ruins due to a fire in 1950's that engulfed almost everything. It has been restored now to it's full standing and it is a magnificent view surrounded by beautiful scenery around it